Real time film scanner for transferring 35mm and 16mm film at up to 30 frames per second via Thunderbolt 3 or PCIe at full Ultra HD resolution and even HDR. Includes DaVinci Resolve Studio Software.

No other company in the world has more experience at scanning film than Cintel, and now that knowledge has been combined with cutting edge technology to produce the new Cintel Scanner! The new Cintel scanner has been designed with an architectural aesthetic and it’s so thin it can even be wall mounted! It features totally redesigned digital servos, high intensity diffuse light source and imaging systems, so you get a real time scanner that scans 35mm and 16mm film up to 30fps in Ultra HD resolution! Now you can use film for post production or unlock millions of hours of film based content for scanning to Ultra HD masters for a new future world of exciting Ultra HD distribution!

With consumers purchasing large Ultra HD televisions in massive quantities right now, the demand for great Ultra HD content has never been greater and will become a boom market in the next few years. Ultra HD is incredible quality and there are millions of hours of Ultra HD content that’s been generated over the last 100 years locked up in 35mm film that is stored in vaults worldwide! The new Cintel scanner will scan negative and positive 35mm film into amazing quality Ultra HD and you can unlock the extra resolution from 35mm film that no one has been able to see until now! 35mm film is natively 4K so the extra quality is already in the film. There is no easier way to generate Ultra HD feature films and television programming for customers to view on their new large screen televisions! 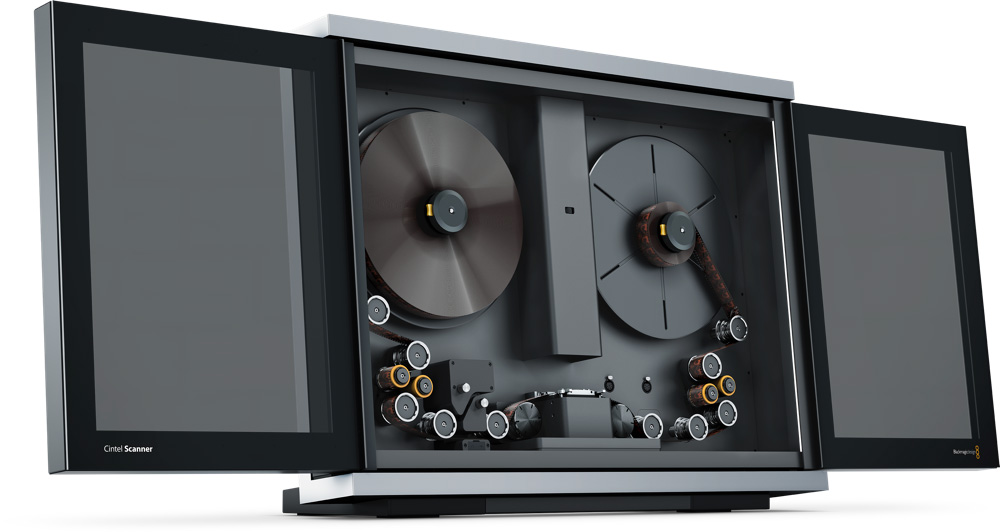 Designed to hang beautifully on your wall, the Cintel Scanner is constructed using aircraft design techniques for a stiff and vibration free main deck so you get smooth film handling. The core chassis has been designed as a super rigid structural space frame, which results in a design that’s dramatically lighter than an older simplistic heavy plate design. This means the Cintel scanner is light enough to be wall mounted in your facility, making it part of the environment of your color correction suite. Being super thin and wall mounted, it’s out of the way until you need to use it, and then it springs to life and performs! Whether wall or desk mounted the innovative design includes sliding doors, built in cleaning rollers and new digital servos to keep your film clean and ensures handling of valuable negative remains gentle.

The Cintel Scanner is an innovation in technology. Film traditionally has been a mechanical technology and film products have suffered from poor quality electronics that required experienced engineers to keep them working. The new Cintel Scanner 2 has been designed with the latest Blackmagic Design image processing technology and now features a PCIe connection as well as Thunderbolt 3. This means you can now connect it to your Mac, Windows or Linux computer and scan the film directly into your color correction system. That makes setup and use extremely fast plus eliminates slow file copying after scanning. You get easy to install software updates that can add new features in the future. It also means you can upgrade your computer whenever you need!

The Cintel Scanner is the world’s first real time 4K film scanner to use Thunderbolt 3, making it super easy to set up and install. The new diffuse high intensity light source means the Cintel Scanner runs at a smooth real time speed keeping film handling gentle and transfers super fast. The Thunderbolt 3 connection features a massive 40 Gb/s speed so you can transfer all this data direct into your computer without quality limitations. You can even change computers simply by unplugging the single Thunderbolt cable. In addition, there’s also an external PCIe interface for connecting to Windows and Linux based computers that don’t have Thunderbolt 3. With the Cintel Scanner, you get the high resolution of a film scanner with the real time use of a traditional telecine! 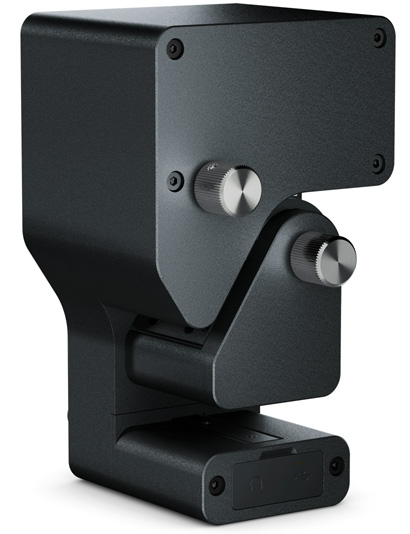 The optional Audio and KeyKode Reader lets you capture high quality audio along with KeyKode information from the film. The reader features a magnetic audio head or deep red LED illumination with advanced optics, electro formed slits, and precision mechanical adjustments for azimuth, zenith and yaw to give you the best possible audio capture with incredible high frequency response. The reader also features a precision capstan and encoder that allows for automatic correction of wow and flutter, allowing you to accurately capture audio, even when the scanner speed changes! The KeyKode Reader provides you with unique identification numbers for each film frame so they can be easily correlated with the corresponding video timecode. Installation is easy and all you need to do is bolt the reader onto the front of the chassis and it will automatically be detected.

The Cintel Scanner is easy to set up and configure thanks to it’s Thunderbolt 3 and PCIe interfaces. Simply connect the scanner to your Mac or Windows workstation, install DaVinci Resolve Studio, and start scanning! That means you don’t need a dedicated engineer to operate and support the scanner. The Cintel Scanner has been designed to give you the freedom to move it between machines or even plug into laptop computers so you can scan your film directly into the computer you’re going to use the content on. The HDMI output supports Ultra HD televisions for perfectly accurate focusing and film alignment using a local monitor. Cintel Scanner 2 also features a new bi-phase and timecode output connection to connect to external equipment such as audio followers and more! The HDMI output can even be converted into SDI video using Blackmagic Mini Converter HDMI to SDI 4K, perfect for connecting into your system for client monitoring!

Using the Cintel Scanner is easy and intuitive. You get scanner control software that includes everything you need to transfer and capture films to Ultra HD or HD files. Scanned files can also be opened with DaVinci Resolve for further color, restoration and mastering work.

In the past when film was the main way to get high quality images for post production, Cintel telecine’s and DaVinci color correction was the standard combination used worldwide! Now these two wonderful brands are back together again because the Cintel Scanner includes a full copy of DaVinci Resolve Studio software! Now you get full color correction features included so you can take advantage of the Cintel scanner’s amazing image quality. You will never be limited creatively by your equipment because you’ll have incredible film looks combined with the same powerful color correction toolset used by the world’s leading cinematographers!

You get the Cintel Scanner with powerful built in Image Mill stabilization, a single 35mm HDR film gate (16mm purchased separately), two film spools, a set of four cleaning rollers, desk mount feet and DaVinci Resolve Studio software, which is used to operate the scanner. DaVinci Resolve also includes grain reduction, dust busting and dirt removal tools. The Blackmagic Design Cintel Scanner is a complete solution. There are no hidden installation fees, no software update fees, and no ongoing license fees. You may also transfer your scanner to another user absolutely free.

Up to 2% guaranteed, more may be possible if user care is taken.

Thunderbolt 3 for capture of image and audio, software updates and supports USB-C charging with 15W at 5V.

Cintel requires Desktop Video installed on the host computer to operate. Scanning can be controlled though DaVinci Resolve or through third party software using the Cintel SDK.

Operating Systems as per Desktop Video Read Me